Before the Chinese Communist Party took power, China lay broken. Today it is a force on the global stage, but remains haunted by the past. Sulmaan Wasif Khan chronicles the grand strategies pursued by China’s paramount leaders: Mao Zedong, who unified the country and kept it whole; Deng Xiaoping who dragged that country into the modern world; Jiang Zemin and Hu Jintao, cautious custodians of Deng’s legacy; and the powerful, insecure Xi Jinping. Despite the costs, China’s grand strategies have been largely successful. But success brings significant challenges—ones ever more pressing in the twenty-first century.

Sulmaan Wasif Khan teaches international history and Chinese foreign relations at the Fletcher School, Tufts University, where he also directs the Water and Oceans Program at the Center for International Environment and Resource Policy. He is the author of Haunted by Chaos: China’s Grand Strategy from Mao Zedong to Xi Jinping(Harvard University Press: 2018) and Muslim, Trader, Nomad, Spy: China’s Cold War and the People of the Tibetan Borderlands (University of North Carolina Press: 2015). 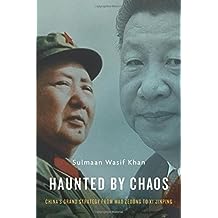