Krishan Kumar on Visions of Empire: How Five Imperial Regimes Shaped the World

Empires, particularly in recent years, have often been studied from the point of view of the subject peoples. Krishan Kumar focuses rather on the ruling peoples, their outlook, their sense of themselves, the ways they justified and maintained their empires. He is particularly concerned with the ruling peoples in the Ottoman, Habsburg, Russian, French and British Empires.  Of particular interest is the attitude of the rulers to the challenge of nationalism: both the nationalism of the subject peoples and, in many ways more threatening, that of the ruling peoples themselves.

Krishan Kumar is University Professor and William R. Kenan, Jr., Professor of Sociology at the University of Virginia. He was previously Professor of Social and Political Thought at the University of Kent at Canterbury, England. He was educated at St. John’s College, Cambridge, and the London School of Economics.  Among his publications are 1989: Revolutionary Ideas and Ideals (2001), The Making of English National Identity (2003), and Visions of Empire: How Five Imperial Regimes Shaped the World (2017).  He is a frequent contributor to theTimes Literary Supplement. 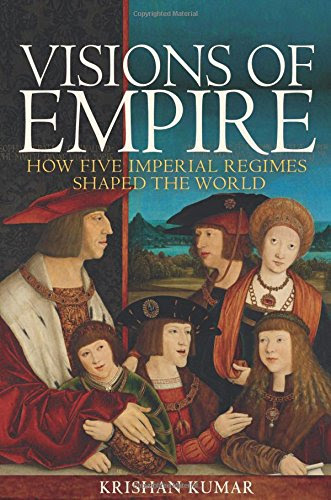