Nathan Stoltzfus on How Modern Was Hitler’s Dictatorship

Scholars distinguish traditional from modern dictatorships on the basis of their goals and tactics. Hitler and Stalin epitomize the traditional, marked by reliance on violence and efforts to impose ideologies. Today’s dictators rely primarily on other means to maintain popularity and power and do not seek social revolution. Stoltzfus argues that Hitler’s goals of mass murder and his resolve to change German beliefs limited his reliance on instrumental force to rule his own Volk.

Nathan Stoltzfus is Dorothy and Jonathan Rintels professor of Holocaust Studies at Florida State University. His books include Hitler’s Compromises: Coercion and Consensus in Nazi Germany (Yale UP, 2016) and Resistance of the Heart: Intermarriage and the Rosenstrasse Protest in Nazi Germany (WW Norton, 1996), co-winner of the Fraenkel Prize and other awards. He is co-author or editor of five additional books and author of many articles scholarly and other publications including The Atlantic Monthly,Der Spiegel, the Daily Beast, Die Zeit. 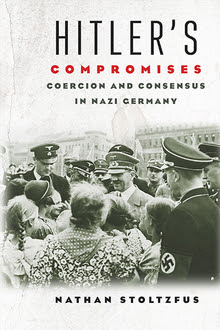