Samuel Walker on Most of 14th Street Is Gone

Click here to RSVP: Most of 14th Street is Gone: The Washington, DC Riots of 1968 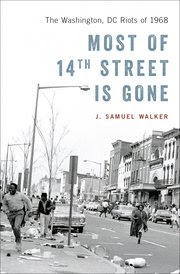 In his Washington History Seminar presentation 50 years after the Washington DC riots of April 1968, historian Sam Walker will stress three main points about their origin and impact. The first is that the main cause of the riots was the dismal living conditions in many largely African American neighborhoods. He takes issue with the argument that the riots were incited by rabble-rousers or black militants. The second point is that the response to the riots by city and federal officials was measured and responsible. The policy of restraint they followed was the key to reducing loss of life, even though it probably led to greater property damage. Finally, he will examine the long-term consequences of the riots on the areas of the city where they took place.

Samuel Walker spent most of his career as historian of the U.S. Nuclear Regulatory Commission. In that capacity, he published five books, including Three Mile Island (University of California Press, 2004) and The Road to Yucca Mountain (University of California Press, 2009), which received the OAH’s Richard W. Leopold Prize. He is also the author of Prompt and Utter Destruction: Truman and the Use of Atomic Bombs against Japan (3d edition, UNC Press, 2016) and two books on the history of college basketball.